Birds of the Upper Missouri

At dawn on a chilly May morning, visitors began arriving on the deck of a home overlooking the Missouri River near Craig, Montana.  In addition to bagels and coffee, the visitors carried binoculars, spotting scopes, and books such as A Field Guide to Western Birds (Peterson) and The Sibley Guide to Birds (Sibley).  These visitors were preparing to begin their annual Bird Day where they count and identify all the birds seen from this same riverside deck from dawn to dark on this same date each year.  And they have been doing it for 30 years!

Over time, these avid birdwatchers have seen over 100 species of birds on the Upper Missouri, including the common cliff and barn swallows, golden and bald eagles, and osprey, but also the rarely-seen wood duck and whooping crane.  One year the birdwatches use their powerful spotting scopes to observe a big horn sheep give birth on a cliff a half mile away.

Birds are integral to the Upper Missouri River experience.  Most anglers and recreational floaters have watched in awe as eagles soar overhead and osprey dive for fish to feed their hungry chicks in the many ragged, riverside nests of sticks and orange bailing twine seen on the Upper Missouri.  In the fall, hundreds of waterfowl enliven the river, including goldeneye, mallards, and Canadian geese.

In our appreciation of birds, their beauty, their courage, and intelligence, modern birders are part of a long tradition.  Native Americans, including the Assiniboine, Arikara, Blackfoot, Crow, Hidatsa, and Mandan tribes have shared the Upper Missouri with birds for over ten thousand years.  Birds are key players in nearly all of the creation stories of Upper Missouri tribes. The mallard, American coot, the grebe, grouse, goose and teal are all credited by one or more tribes with helping to create this earth by diving to the bottom of a flooded world to retrieve mud to build a world for humans.

Our Bird Day visitors are more avid than most, but they are not alone.  There are some 290,000 birdwatchers in Montana, including 117,000 out-of-state visitors who come to Montana with bird watching intentions.  Nationally birdwatchers spend over $40 billion on their hobby including on specialized equipment, bird feeders and food, and travel to see more birds.  If they are like birders nationwide, Montana bird watchers spend about $260 million annually on their passions for birds and add over $680 million and 4000 full and part-time jobs to Montana’s economy. 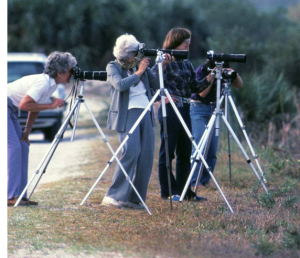 The economic importance of birds is not new.  Long before Europeans arrived, the Arikara, Assiniboine, Blackfoot, Crow, and Mandan tribes engaged in extensive trade in the feathers and skins of geese, crane, swan, golden and bald eagles, and others. The Blackfoot were especially dominate in the trading of Golden Eagle feathers.  Some Blackfoot tribal members were eagle trappers by occupation.  They owned, protected, and defended valuable trapping sites.  Birds also provided important sources of food for Native Americans.

In addition to their economic importance, birds play essential ecological roles in keeping the Upper Missouri Watershed healthy.  Because they are highly mobile and can move long distances, birds are especially good at linking different ecosystems.  Linking is important for keeping energy flowing and recycling nutrients.  For example, fish-eating bald and golden eagles move essential nutrients from aquatic to terrestrial environments.  There are known to be centuries-old eagle aeries (nests) rich with the remains of fish located in prairie lands tens of miles from the Missouri, Sun, and Dearborn rivers.

Birds are also important for pest control.  A single owl consumes 10,000 mice in its lifetime.  Swallows consume millions of mosquitoes and many birds love to eat grasshoppers.  Many species of birds pollinate flowers and plants, with hummingbirds being especially important pollinators in the Upper Missouri.

Birds are also important seed dispersers.  Jays provide the primary means of spreading the seed of ponderosa, limber, and white bark pines.   We can probably thank jays for seeding patches of limber pine on the north slopes of Birdtail Butte in the middle of the dry prairie north the Cascade, Montana.  Scavenging birds, such as magpies and eagles, live on carrion and dispose of dead animals.  In doing so, the birds limit the spread of disease and provide natural control of pathogens.  Although the linkages are less obvious, healthy trout populations depend upon pelicans and diving ducks, whose feeding on river bottom sediments contribute to the lifecycles of midges and annelids (aquatic worms). 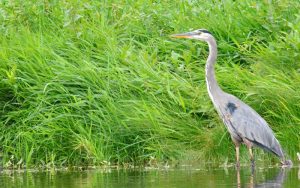 While there is much we don’t know about the contributions birds make to a healthy Upper Missouri Watershed, we do know that plentiful bird populations are important. Nationally the trends in bird populations are disturbing.  A recent report says that the United States has lost over 3 billion birds (a 23 percent decline) since 1970.  Grassland birds are especially in decline, while raptors (hawks and eagles) are actually increasing.

In the Upper Missouri, the evidence on bird populations is more hopeful, but somewhat out-of-date.  Between 2004 and 2015 Northwestern Energy, as part of their Federal Energy Regulatory Commission license requirements, paid the Bird Ecology Lab of University on Montana to survey birds along 500 miles of the Madison and Missouri Rivers of Montana.  The surveyors observed 139 different bird species, about 50 percent of the avian species known to breed in Montana.  They but found no significant evidence of increasing or decreasing bird populations overall.  But they did find significant decreases in 11 species (song sparrow, grey catbird, mourning dove, house finch, American goldfinch, black-billed magpie, red-naped sapsucker, western wood-pewee, and warbling vireo), as well as increasing populations of six species (yellow warbler, house wren, black-capped chickadee, least flycatcher, American robin, and red-winged blackbird).

Although we are not aware of more recent bird survey data for the Upper Missouri, it may not bode well, the University of Montana surveyors also found evidence of degradation of the Missouri’s riparian habitat, including declining shrub cover, decreases in willows and mature forests, and increasing presence of invasive plants and trees, such as Russian Olive and Rocky Mountain Juniper.

The results of the 2022 GBBC are in and they are exciting.  Almost 200,000 birders in the U.S. recorded 689 species seen during at least one birdwatching foray.  In Montana, 1045 birders reported seeing 123 different species.  Surprisingly, one of the most common species seen was the trumpeter swan.  Most of the swans were seen at the Lee Metcalf National Wildlife Refuge in Ravalli County, but a few were seen on the Missouri River as well.

To illustrate the wonderful diversity of bird life living here, here are five species seen on the Upper Missouri you may not have noticed before, at least at this time of year: Pied-billed Grebe, Lapland Longspur, Black-back Woodpecker, and Northern Shoveler.

As we enjoy the Upper Missouri Watershed, keep an eye out for birds.  You might be surprised and pleased at what you see. 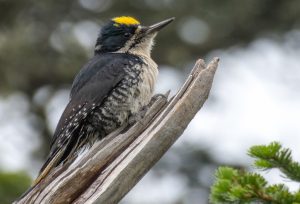 Mahendiran, M. and P. Azees. 2018. Ecosystem Services of Birds: a review of market and non-market values.  Entomology, Ornithology, and Herptology. 2018: 2-4.